Synthetic marijuana (aka Spice or K2) use has grown dramatically in recent years.  Correspondingly, recent reports are showing a spike in synthetic pot emergency room visits.  Symptoms include excessive bleeding from the eyes, nose, ears, and gums (1).  Alarmingly, others report seizures and even death (2)

What Is Synthetic Marijuana?

Synthetic pot first showed up in the early 2000’s with users coming into emergency rooms reporting bizarre symptoms not normally associated with marijuana.  Specifically, reports include excessive bleeding, seizures, and even death.

Synthetic marijuana is a chemical compound designed to activate the same brain receptors (CB1 and CB2) that are affected by organic marijuana’s active ingrenient, THC (tetrahydrocannibol).

Researchers report there are now more than 150 different types of synthetic marijuana compounds. (3)  Recently, Sacramento Police busted a synthetic pot lab that was using the deadly opioid Fentanyl as a primary ingredient.  Fentannyl has been linked to thousands of recent drug overdose deaths including high profile case like Prince and Tom Petty.  So, as usage increases, we can expect more synthetic pot emergency room visits. 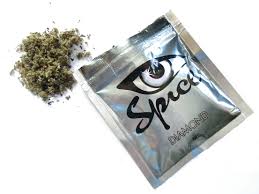 Where Does Synthetic Pot Come From?

Underground laboratories manufacture and distribute synthetic marijuana.  And, these labs are both unregulated and illegal.  Ironically, “Spice”, “K2” and other synthetic marijuana products are often sold “legally” at smoke shops, convenience stores, and truck stops.  How can that be?  Because the formulations are so diverse and complex, it is daunting to keep legislation up-to-date to classify them as illegal.  Package labels state “not for human consumption” to circumvent the law.  And retailers sell it as ‘plant food” or some such other nonsense.

Who Uses Synthetic Marijuana, And Why?

Users choose synthetic pot believing that it must be safe because it is sold “legally”, out in the open at retail outlets.  Marketers promise the same “high” effects as organic marijuana.  But, they do not disclose the adverse side effects.

So using “Spice” or “K2” may reduce the risk of drug abuse detection.  However, it carries significant risks to your health.  So, there is no end in sight for synthetic pot emergency room visits.

(2)  Feb. 2 in the journal Trends in Pharmacological Sciences.