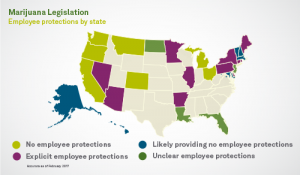 California was the first State to decriminalize marijuana way back in 1996.  A good portion of today’s pot smokers were not even born then.  Last Fall, many States changed their marijuana laws.   So now, what are the new workplace marijuana rights for employers and employees?

Today, around half of the States have some type of medical or recreational weed laws.  The most recently-passed cannabis laws have created a lot of confusion about new workplace marijuana rights for employers and employees.   So, employers need to be mindful as new laws come to pass.  Because, it’s a moving target.

What Employers Need To Know

The Federal Government has changed no marijuana laws.  Marijuana is still a Type 1 controlled substance with no legal medical use.  However, at the state level, laws are changing.  And so are the new workplace marijuana rights for both employers and employees.  Here’s where things stand at the end of the first half of 2017.

There are seven states where employers have not been required to accommodate marijuana smokers, even if they have a “medical” marijuana card.  They are: California, Colorado, Michigan, Montana, Ohio, Oregon, and Washington.  That’s because their statutes either explicitly deny protection, or case law has found no protection.  So, employers need not hire, nor retain. pot users in these states.

There are seven states and Washington, D.C. that are silent about employee protection.  The states include: Alaska, Hawaii, Maryland, Massachusetts, New Hampshire, New Mexico, and Vermont.  So employers probably need not hire, nor retain, pot users in these states. 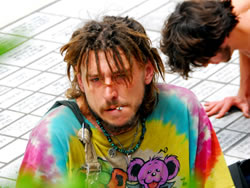 There are eleven states that have varying levels of protection for “medical” weed smokers.  They are Arizona, Arkansas, Connecticut, Delaware, Illinois, Maine, Minnesota, Nevada, New York, Pennsylvania, and Rhode Island.

Then there are four states where the laws either silent or unclear:  Florida, Louisiana, New Jersey, and North Dakota

In all 50 states, employers still have the right to maintain safe, drug-free workplaces.  So, employers may still test for marijuana in all 50 states.  You do not need to accommodate marijuana use on-duty, or being under the influence at work.

Employers will be wise to have a clear, well-defined Drug Free Workplace Policy for the protection of all concerned.